Since late Sunday night we’ve received about 10 inches of lovely, powdery snow.  If we lived in ski country, it would be paradise.  We don’t.  It’s not.  But we make the best of it.

In a period of 24 hours I have cleared my drive and sidewalk 3 times – but my “snowblower” (if you can call it that) has only been used once.  I can’t decide whether to take the snowblower to the shop to be serviced, or to the psychiatrist for counseling.  Everything seems fine, the motor starts up on the the first pull, the power drive engages, the auger turns when you squeeze the handle – everything is fine, until you hit snow.  Then the auger stops cold, refusing to move the snow, mocking its user, sending me back to the shovel.  Next to the Christmas lights (which are even now as I write twisting and turning and tying themselves in knots in their storage bin), my snowblower is my least favorite thing in the house.

Not one to let the rebellious machines ruin my fun in the snow – we decided to take the kids sledding yesterday.  Here’s a couple of great pictures from the hill… 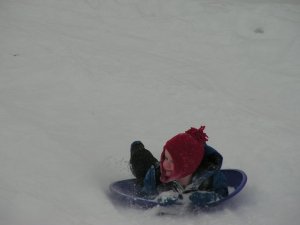 And now for something completely different – I saw this picture today and just had to share it: