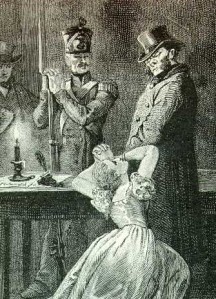 unity Theater’s production of Les Miserables, let me give you one more reason why you should: Amy Sarchet as “Fantine”.  Amy is a member of Memorial Presbyterian, and a good friend and sister in Christ.  On top of all that, she has a beautiful voice, and portrays the role of Fantine with a depth and power that I have not seen in any previous production of this show.

For those of you who are unaware of the particulars of Les Miserables, Fantine’s story is one of broken dreams and broken hearts.  When she was young, she was swept up in a summer romance with a “university” man – he was handsome, eloquent, charming, and passionate – more than anything Fantine could have ever hoped for.  She spent the summer by his side, they dreamed of a new world of peace and equality; but when the summer was over, and the young man’s allowance spent, he left, and Fantine was pregnant.

As the show begins, we meet Fantine ten year later.  She has given her daughter, Cosette, to an inn-keeper and his wife (the Thenardiers) to raise, while Fantine works in a factory and sends money for her care.  Fantine loses her job in the factory, and in desperation sells her hair, her teeth, and eventually her body in prostitution, all to earn enough to provide for her daughter.

Certainly this is not the life she would have chosen for herself, who would.  As Fantine sings in the iconic song, “I dreamed a dream,”

I had a dream my life would be
So different from this hell I’m living
So different now from what it seemed!
Now life has killed the dream I dream.

Jesus encountered many women with similar stories in the gospels.  One woman was caught in adultery and brought before Jesus to see if he would condemn her.  Another was the Samaritan woman who had five husbands as was currently living with a man she was not married to.  Now I realize that our culture’s view on marriage has changed somewhat since Jesus’ day, but I would doubt that any young girl’s dream for her future would include an adulteress affair or a string of broken marriages and non-committal.

Everyone Jesus encountered in the gospels had somehow had their dreams shattered and their lives broken.  The hungry, the poor, wretched, the outcast, the sick, the lame, the mourning – this was not their dream for their lives.  But their hopes were torn apart, their dreams turned to shame.

And this is why Jesus came, to seek and to save the lost.  In Les Miserables, Valjean finds Fantine just as she is about to be arrested, intercedes for her, takes her to the hospital, and as she dies he promises that he will raise her daughter, Cosette, and provide for her every need.  Valjean, whose own life has been transformed by radical grace, offers that same grace to one in need.

This is the grace of Christ that the world needs today: a radical grace that brings comfort and hope to those who despair for want of both.  To the woman caught in adultery, Jesus said, “Neither do I condemn you; go, and from now on sin no more.”  To the Samaritan woman at the well, he addressed her brokenness, but then showed her that He was the Messiah, the savior she had been looking for.  Jesus fed the hungry, comforted the mourning, healed the sick, but more importantly, be brought the grace and forgiveness we all so desperately need.

Imagine if we were to look at the world the way Jesus did.  Jesus saw the world as broken and lost, not so that He would condemn the world, but so that He might show compassion.  He treated each person with grace, compassion, and love.  Sometimes that grace meant a word of correction or rebuke, sometime that grace meant a healing touch; in all, Jesus was revealing the grace of God through His transforming and life-giving love.

If we could live with that same grace, treating one another as if, deep inside, they were wounded, their dreams were broken and their hopes shattered, not so that we could feel superior but so that we could show compassion, how powerful would the message of God’s grace be.  This is the kind of grace that shapes the community of faith, what Paul was describing when he wrote in 1Thess. 5:13ff. “Be at peace among yourselves.  And we urge you, brothers, admonish the idle, encourage the fainthearted, help the weak, be patient with them all.  See that no one repays anyone evil for evil, but always seek to do good to one another and to everyone.  Rejoice always, pray without ceasing, give thanks in all circumstances, for this is the will of God in Christ Jesus for you.”