Two weeks from now I will be in the steamy south of Mobile, AL attending my first ever General Assembly of the PCA. I’ve never been to Alabaman before, so I’m looking forward to the visit, and a little nervous about exploring new places.  In addition to the fact that I will be away from the family for a week,  rebounding from this trip to a week at Church Camp, I have some trepidation about going to GA.  Let me try to explain.

My experience with General Assembly meetings in the PCUSA have not gone well in the past.  I first attended General Assembly back in 1994 when it was in Wichita, KS.  I was working that summer at a church camp in S.E. Kansas, and because GA was in Wichita, the High School camp ended early, and we bussed the kids to GA for the opening worship service and an overnight lock-in with other PCUSA students from around the nation.  The lock-in was frustrating: there was no Biblical teaching, just a long night of dodge-ball, movies, and food. Everything a kid would want, but nothing that they needed. I saw it as a wasted opportunity to equip the students, who one elder said were “the future of the church” to grow in their understanding and love of God in Jesus Christ and to become engaged in the evangelism and outreach of the church.

Fast forward almost 18 years. I was serving as a PCUSA pastor in NE Iowa, and the denomination was again contemplating changing its ordination standards to allow for the ordination of practicing, unrepentant, homosexuals as Teaching and Ruling Elders and Deacons.  My session had approved a motion requesting a moratorium on the ordination issue, calling for a time of prayer and discernment.  The motion was approved by the presbytery, and I was asked to present the motion to the General Assembly. 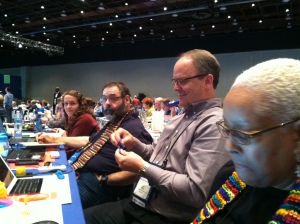 Hmm, how do you think I’m going to vote?

This was my Daniel in the Lion’s Den moment.  I walked into the conference center, and was immediately greeted by other commissioners bedecked with Rainbow Stoles, making clear where they stood on the matter of ordination.  Any hope for an open-minded reception was gone.  The opening worship service for the Assembly included 12 foot puppets, dancing through the congregation during the “blessing of the four directions.” The motion I presented was laughed at in the committee hearing (by the open-minded-stole-wearing-delegates), and the motion to change the standards of ordination were passed by the GA and eventually by a majority of presbyteries.

So I head to the PCA General Assembly wary of the political nature of such gatherings, but also optimistically hopeful about what may come.  Next week, I will share some of the business that we will be discussing at General Assembly, but today, I simply offer my prayers for what I will experience.

My prayers for General Assembly:

Be praying for me, for the Presbyterian Church in America, as we come together for our General Assembly (June 20-24, 2016).  I’ll be trying to post updates while at GA, so keep checking in here at the blog.

1 thought on “Hopes for General Assembly”