So, the Sayler house is decorated for Christmas.  The tree is up, with all of its trimmings (including brand new working lights – that’s another story).  The garland hangs from the fireplace mantel; the stockings are there too, awaiting a visit from jolly old Saint Nick.  I even managed to get the lights up outside before the wind and cold set in, which is saying something for living in NW Iowa.

Of all the decorations that we have out for Christmas, I think the little boy 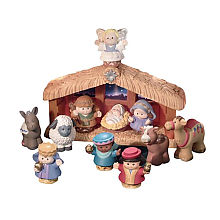 s’ favorite must be the “Little People Nativity Set.”  It’s a little play set nativity, complete with Wise Men, Shepherd, various livestock, and of course, Mary and Baby Jesus (curiously, no Joseph – must have gone to the store for diapers).  The boys love to play with the figures of the nativity, right alongside their toy Superman, Batman, and other Super Heroes.  More than once I’ve seen the Son of Man, nestled in the manger, flying side by side with the Man of Steel – I’m so proud.

The one downside is, there are so many pieces, they tend to go missing throughout the day.  At lunch, supper, and bed time, we have a family search for the missing characters.  Recently, the most notoriously lost seems to be baby Jesus.  My house is beginning to sound like a Baptist revival.  “Have you found Jesus?”  “I found him, I found Jesus!”

Sometimes Jesus is hidden under the couch or radiator.  Other times he’s under the piles of Christmas Story books that get put out on the coffee table this time of year.  Then sometimes Jesus get hidden in toy baskets, under coats, and amongst the other clutter of the house.

As we were once again searching for the Christ child last night, I began to realize this was a great lesson for us as adults.  Is Jesus missing from your Christmas?  Have you found Him?  Are you even looking?  Did you even notice he was missing?

Sometimes Jesus gets buried under the furious rush to find all the right presents, getting the Christmas cards written and mailed, and having the decorations just right.  Sometimes Jesus gets lost in all the busyness and chaos of a season that is supposed to be a celebration of the coming of the Prince of Peace.  All too often, without even thinking about it, we just push Jesus off to the side of our celebration, “I’ve got too much going on to worry about all that religious stuff too!”

At the risk of sounding cliché, it is so important that we keep Christ in Christmas.  If we can’t keep Jesus at the center of our Christmas celebration, is it really Christ’s mass?  If we can’t spend the Advent season developing a longing and expectation for the return of our King, will we ever?  If we lose Jesus at Christmas, how will we ever hope to find him throughout the rest of the year?

My encouragement to you this Christmas, and anytime throughout the year, is keep searching for Jesus.  Watch for Him, wait for Him.  See where He is missing in your life, and search for Him as if your life depended on it.  Turn to the Scriptures to hear His word again; His word of life, of hope, of righteousness and peace.  Repent and confess of those things which you have put before Christ, which have kept you from the joy of obedience to your Lord.  Make worship, privately and corporately, a priority, so that you may find yourself where Christ has promised to meet us.

My prayer is that in all of your celebrations this season, you will find Jesus again and again.  That would really be a Merry Christmas.

In reading George Marsden’s “Jonathon Edwards: A Life,” I came across something that surprised me.  Marsden wrote that when Edwards grandfather, Solomon Stoddard, passed away leaving him as the lead pastor of a church of 1300 members, Edwards faced three major obstacles.  The first was the issue of admittance to the Lord’s Table for Communion.   His grandfather had practiced a rather open table, allowing all who had been baptized to receive the meal regardless of whether their life showed evidence of true conversion.  There was great debate on this matter, one that plagued Edwards’ entire career, but Stoddard’s position was that there was edification and encouragement for conversion in the celebration of the Table.

Another pressing issue facing Edwards in his new church was a growing political divide.  This was the 1720’s, and already there was a growing divide between those who were loyal to the crown, and those who felt independence from the throne would lead to financial and religious prosperity.  It is fascinating the level of contention and divisiveness that political matters such as these had in the church.  Perhaps the reason was that in Edwards day, there was no Cable News to present the political ideas of the day, so the pulpit was the forum in which all ideas were disseminated.

What struck me as most interesting, however, was what Marsden says occupied the majority of Edwards’ attention: the “indulgences of the young” (pages 130-131).  Marsden writes,

The most notorious result was amazing impurities tolerated among the young in recent years.  Not only was lasciviousness encouraged by nightwalking and similar frivolities, but New England parents allowed practices that are “looked upon as shameful and disgraceful at Canada, New York, and England.”  Everyone knew that he referred to the New England practice of “bundling” in which parents allowed young people to spend the night in bed together partly clothed.  “I believe there is not a country in the Christian world, however debauched and vicious, where parents indulge their children in such liberties… as they do in this country…”

Bundling, which was supposed to be a way of getting acquainted without sexual intercourse, did not always work as advertised.  Pregnancies before marriage were rising dramatically in New England.  Premarital sex was commonplace.  Even when it resulted in pregnancy, so long as the couple married, there was no longer much stigma involved.

Edwards noted that the indulgence on the part of the parents was most likely a reaction to their own very strict upbringing, but was increasingly discouraged by the behavior of the youth in his community.  The taverns were full of young men who were wasting their time and energy in worthless pursuits, delaying marriage and work, living with their parents rather than forging out and establishing themselves.  Sounds to me like Edwards could have been writing about 21st century youth as well.

“And there is nothing new under the sun.”  We hear today of the Culture Wars, and young men and women are portrayed in such negative light.  Parents decry “what’s wrong with the children today?”  We see the political divisions of our national leaders, the lack of concern for spiritual growth and maturity, and the erosion of any semblance of moral integrity and we think to ourselves, “Whatever happened to the good old days?”

The truth is, there were no good old days.  Edwards railed against the moral turpitude of the youth of his day; as did Augustine, Chrysostom, Luther, Calvin, and Baxter.  Sin has always and will always attack us where we are most easily tempted.  The youth are tempted with passion and lust; the elders are tempted by power and division, all are tempted to spiritual stupor and sloth.

What Edwards saw as the corrective to the moral decay of his time, the heart of true reformation, was a return to the Word of God.  Revival and reformation would only come through the renewal of the passionate preaching and teaching of the Word of God.  To awaken a people to a zeal for the Lord, to heal divisions within the community, to draw the youth from their immorality and sensuality, they must heed the call of Scripture.

There is nothing new under the sun.  The sins we face today are the sins that have been with us since the fall.

There is nothing new under the sun.  Our savior from sin is Jesus Christ: always has been, always will be.